LA County is massive, which makes finding a good place to live a seemingly insurmountable challenge. This Los Angeles Neighborhood Guide will help narrow down your search to make your house hunt much more reasonable.

Los Angeles County is one of the most densely populated areas in the nation. The County covers roughly 4,781 mi² and is home to approximately 9.8M people. This metro area is divided into 16 different regions. Within these sections, there are various cities and neighborhoods, each with distinct offerings. When house hunting, focusing on a single region will help break Los Angeles down into a more manageable size.

The most daunting aspect of relocating to LA will be picking the Los Angeles neighborhood you want to live. Aside from living close to work and friends, other factors to help you define your search parameters may include proximity to good schools, tree-lined streets and affordability.

Undoubtedly, the best places to live in Los Angeles depend entirely on what matters most to you. Choose your neighborhood wisely because this single factor will have the most meaningful impact on your daily life.

How to Pick an LA Neighborhood to Settle Down In 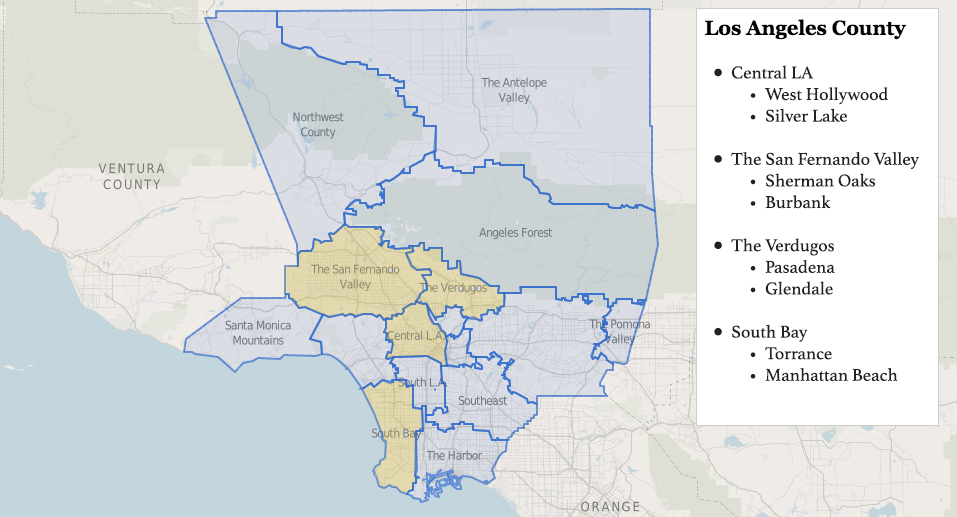 To help you find a home, we’ve highlighted eight of the best places to live in Los Angeles that have varying distances from downtown and the coast. Explore each of these sections and determine which could make a good fit for you and your family. 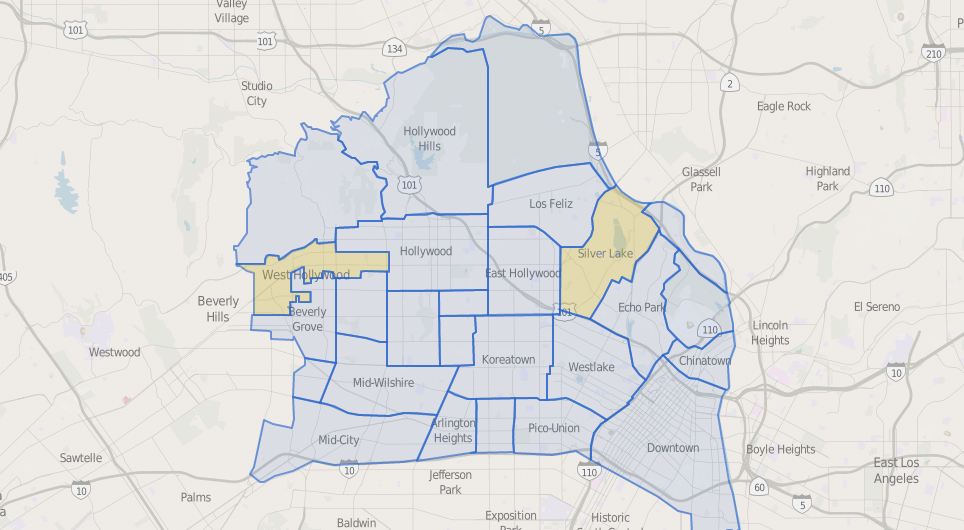 This area of Los Angeles is where you have the most true-to-form city living. It encompasses some of the most densely populated neighborhoods which are among the wealthiest and poorest in LA. Don’t expect to buy in this area. Rentals take up 81.4% of the housing market.

When first visiting, be sure to explore the Sunset Plaza. This area in West Hollywood is a favorite among residents and feels a bit like a time capsule since its looks haven’t changed much over the years.

Coined as the “Williamsburg” of LA, there’s no shortage of trendy options in Silver Lake.  It’s also highly walkable, being that the neighborhood is located close to the city center. The median age is 35–average for the Central LA region. 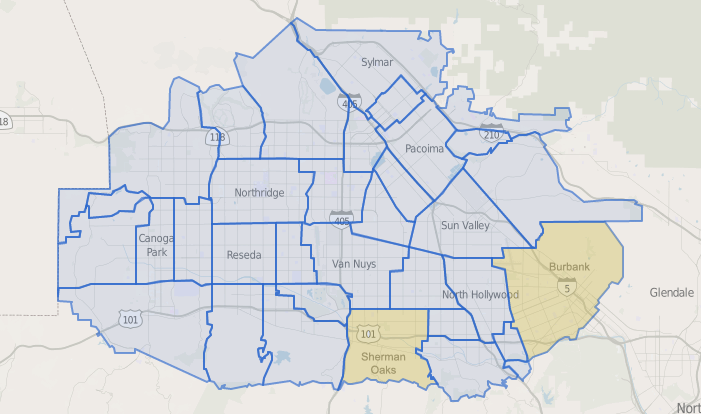 The Valley, despite some negative connotations, is an affordable place to live by California standards. Whether it’s the crime rate, chain restaurants, or the less desirable temperatures, living in the Valley isn’t for everyone. However, we found two cost-effective Valley neighborhoods that might make the change in temperature worth it.

Sherman Oaks is where you move when you want to feel like you’re living in a city but also want suburban conveniences. Proximity to the 101 makes getting downtown manageable (about 20 minutes not during rush hour). The median age is 37, composed mostly of middle-aged professionals. This neighborhood is considered safe and family-friendly.

If your dream is to witness movie production sets in action, Burbank may be the neighborhood for you. Though film studios are the main attraction, Burbank features a charming 1950’s vibe. The city comes with its own police force, ensuring less crime than other parts of the Valley. Burbank is a prime neighborhood for raising a family with a median age of 36.

Burbank isn’t without its charming local businesses. “There’s a popular Cuban bakery called Portos where the lines are long but worth the wait. Their potato balls and cheese rolls are always fresh and warm,” Grace Chang of Grace Chang Homes reflects. “Another darling little area is called Montrose with shops, restaurants and an authentic Mexican restaurant, La Cabanita.” 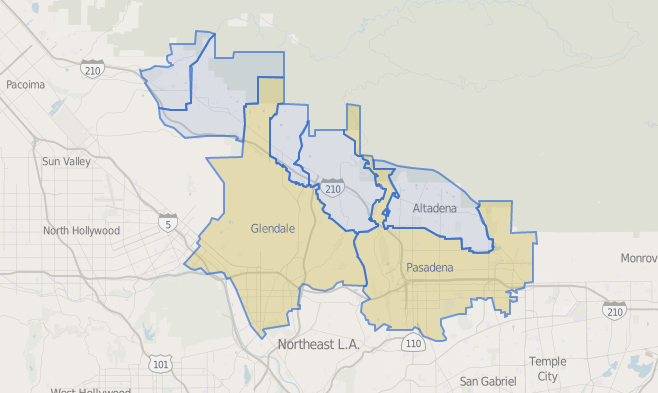 The Verdugos is a small region in Los Angeles County that consists of seven neighborhoods. Two of the more substantial sections are the cities of Glendale and Pasadena, both of which border the Verdugo mountains and make our list of desirable places to live.

With over 50 public parks and ample green space, Glendale may be the most picturesque suburb in all Los Angeles County complete with a distinct downtown area.

This neighborhood has a large Armenian population, making it the perfect neighborhood for authentic Armenian shops and restaurants. The median age here is 37.

Ah, the iconic California Craftsman. Such rad architecture! This is one of my favorite Craftsman’s in my neighborhood of @bungalowheavenpasadena. ? . This Sunday is the Bungalow Heaven home tour. For all of you Craftsman, Spanish, Tudor, Storybook bungalow lovers, I highly recommend you swing by and take a stroll through Pasadena’s first Historic Landmark District. It’s gonna be a good time with music, food trucks, vendors, etc. for more details and photos of my favorite homes, check out my stories / and or story highlight “Bungalow Heaven.” ? . . . . . . . #craftsman #craftsmanhome #craftsmanbungalow #californiacraftsman #bungalow #bungalowstyle #bungalowheaven #ilovela #lostinla #lastory #yourpasadena #pasadenalife #lalife #pasadena #onlyinoldpas #OneColorado #EnjoyPasadena #discoverLA #placestogo #architecture #architecturephotography #blueskies

The phrase “stop and smell the roses” has become synonymous with Pasadena. Each New Year’s day, the Tournament of Roses parade takes place, and let’s not forget about the Rose Bowl. The neighborhood is home to thriving Caltech University, where students flock from around the globe.

If you’re looking to live in a historical section, consider Bungalow Heaven, a small subset of Arts and Crafts houses nestled within the suburb. The median age is 34–young for Verdugos. 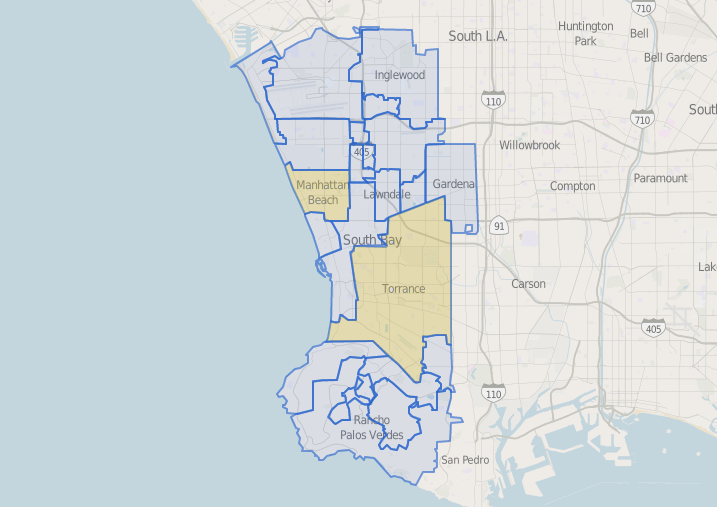 South Bay is located at the south-westernmost tip of Los Angeles County. This region includes both upscale and suburban neighborhoods near the ocean. Looking for a lavish beach life? Look to South Bay. Explore the area and its communities on the Strand, a path that runs along the coast and is a frequent spot for cyclists and joggers.

If you’re moving to California to get closer to the ocean but still want to be near downtown LA, Torrance may be the neighborhood for you. Though the entry price and cost of living are high (well above the national average), the town boasts many historical ocean-view properties built in the early 1900’s.

With a median age of 38, living in Torrance means both heads of households can commute in opposite directions. One might commute into downtown LA, and the other could easily commute down to Long Beach.

Torrance is both family oriented and charming. Realtor and community organizer Carol Gilles speaks about the city of Torrance with pride. “Our town is home to the longest-running Armed Forces Day parade in the nation. It’s truly fascinating. Also, our downtown neighborhood has a full season of live theater.  When you see a show, it’s not just a wall and a few characters. We have some of the best set designers.”

Manhattan Beach might be coastal living at its best. The median age is 37–about average for South Bay. This neighborhood caters to families and singles with excess capital since there’s nothing currently on the market for less than $2 million. As far as education, the Manhattan Beach Unified School District ranks among the top school districts in Los Angeles County.

This beachfront city does an excellent job of keeping its community calendar full of events that cater to all age ranges, but the true hidden gem in Manhattan Beach is Manhattan Beach itself. According to South Bay writer and realtor, Marlene Silva, real estate prices have increased dramatically in the last 24 months as more and more people discover the area. “People move to Manhattan Beach for the incredible lifestyle, and the freedom to be outdoors any time of the day or night. People are free to be who they want to be here. You don’t have to look a certain way or act a certain way.”

We hope you found some interesting sections of Los Angeles where you could see yourself living. Do you already live here? What neighborhoods appeal most to you and why? Let us know in the comments below! Your input could help a wannabe resident find their dream home.