These Are The Best Neighborhoods In Las Vegas

Las Vegas is a collection of unique neighborhoods ranging from high-rises to secluded, historical to brand new. Finding the best neighborhoods in Las Vegas is important not only because of the time you’ll spend there but also because many residents define themselves, and others, by their neighborhood.

Additionally, while the city is small – it only takes about 45 minutes to dive from one corner of the city to the other – many people sadly get “stuck” in their quadrant and are reluctant to explore. Luckily, this is something you can control. Wherever you choose to live it would serve you well to explore them all.

For these reasons, we went to the experts: the locals. After surveying Las Vegas residents on the best neighborhoods in Sin City, here’s what we found.

The Best Neighborhoods in Las Vegas for Raising a Family

Read Also: Moving to Las Vegas with Kids? Here’s What You Need to Know

The Best Neighborhoods in Las Vegas for Retirees

Read Also: What You Need to Know Before Retiring in Las Vegas

The Best Neighborhoods in Las Vegas for Singles 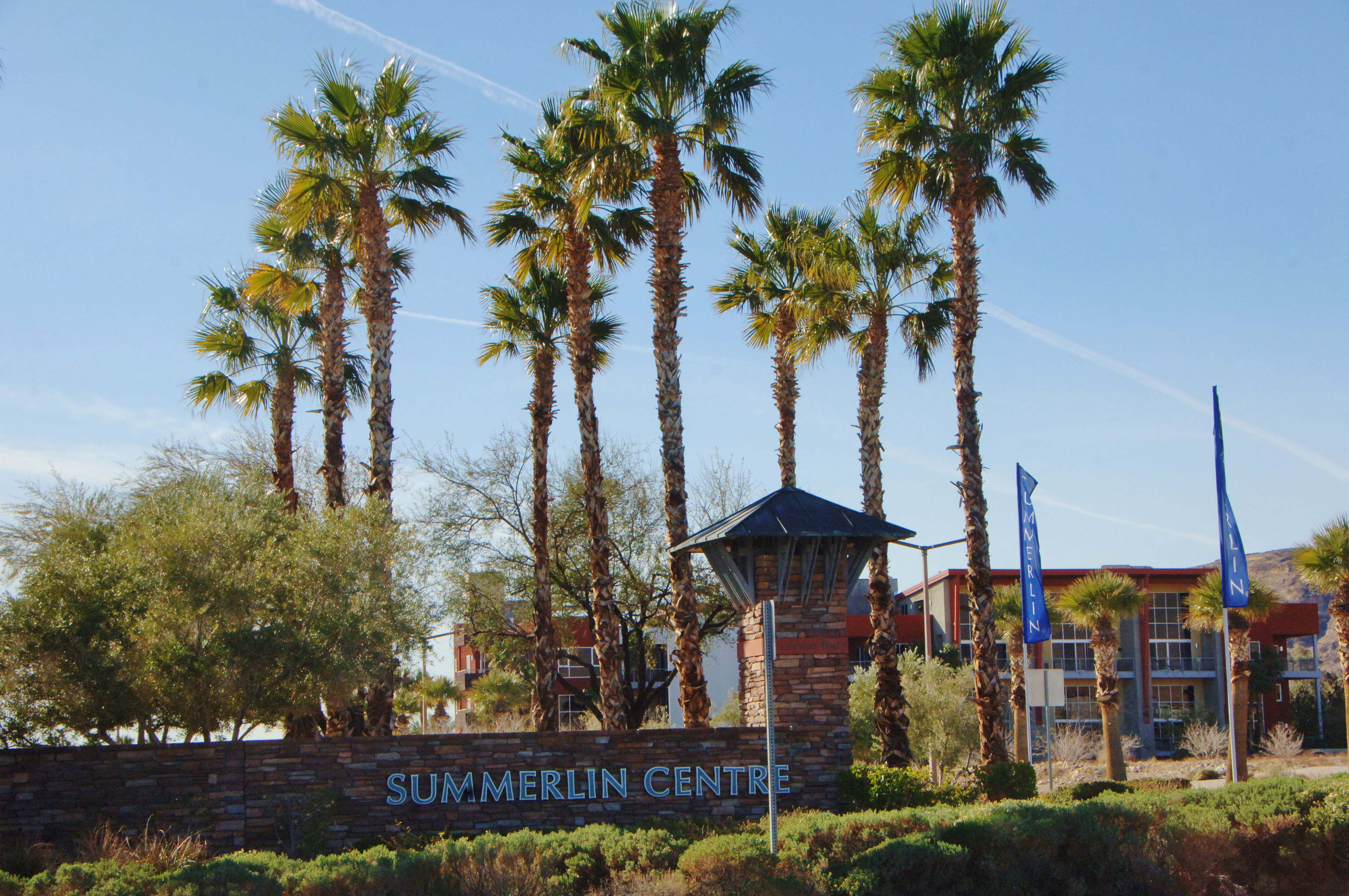 The two best known and largest parts of town are Summerlin and Green Valley. Both are master-planned communities with plenty of smaller neighborhoods within. They include options for guard gated, gated, and non-gated areas.

These Vegas neighborhoods have plenty of trails throughout the area and nicely maintained common spaces. They are very much your typical neighborhood options with cul-de-sacs, dog parks, community pools and large, national builders showcasing their most popular floor plans. Each even has its own downtown shopping district with mid-rise residences if you want the building convenience with the neighborhood feel.

Summerlin, in the northwest part of the city, is more established. Homes there are a more expensive and the neighborhoods are more splintered as the development has continued to expand. Green Valley, in the southeast corner with a Henderson mailing address, feels more cohesive with more accessible green spaces, and parks.

Seven Hills in a beautifully master-planned community south of the city and east of I-15.  Thanks to its geography, the homes here have stunning views of The Strip as well as the red rocks and mountains behind it.

A newer area, many homes are custom built with vacant lots if you choose to create your own vision. This area is better known for families and empty nesters thanks to its proximity to golf clubs and the amenities that come with a golf course community.

Also on the southern part of the city but on the west side of I-15 is Spring Valley. Spring Valley is a newer community with fewer amenities than Summerlin or Green Valley. This means it’s a more economical option. This area offers single-family homes, condos and even townhomes, which are not common in Las Vegas. The yards are smaller but residents are just minutes from Red Rock Canyon, Las Vegas’ backyard.

Another master-planned area for those who don’t mind being a bit outside the city is Lake Las Vegas. About thirty minutes southeast of downtown, which is an eternity for a Las Vegas commute, Lake Las Vegas is built around a man-made lake with a few resorts, a version of the Ponte Vecchio, a golf course and some spectacular houses.

Because of its seclusion, it is home to stars like Celine Dion. Lake Las Vegas has witnessed the rise and fall of Las Vegas real estate possibly more than any other area. That translates to more available inventory as well as lots to build your own home. 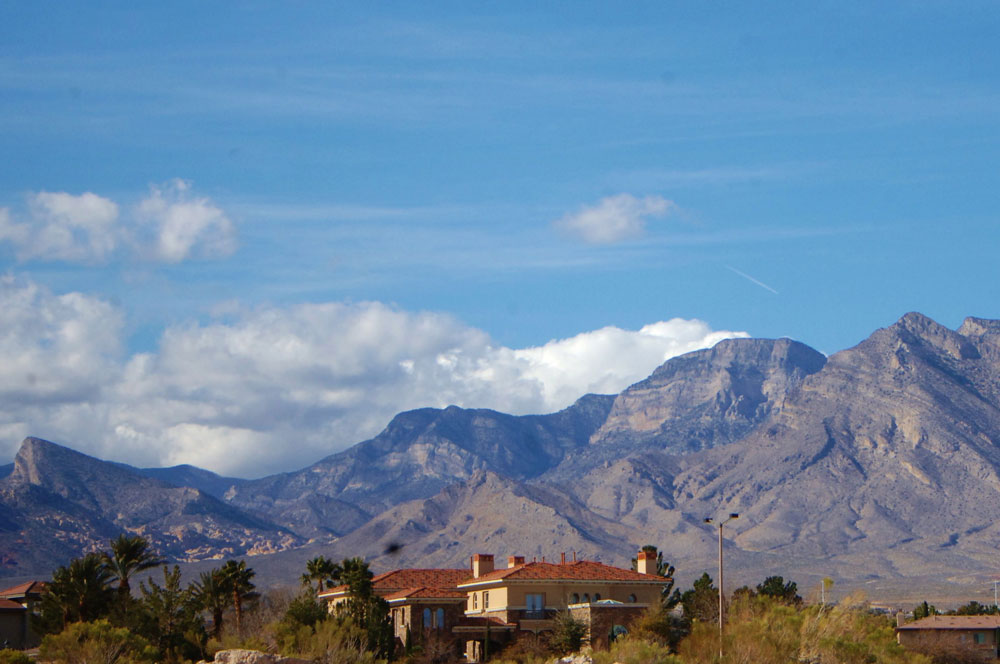 If you crave wilderness and open space, the Neon City can still deliver. The little hamlet of Blue Diamond off highway 159, which loops out west of Las Vegas from the northwest to southwest, is near plenty of hiking, biking, rock climbing and adventure.

Although only about thirty minutes from downtown, it’s common to see wild burros and sometimes even a wild horse as you loop through the red rocks. Blue Diamond was originally a mining company town. Today it’s home to fewer than 500 people and the epitomizes small town living.

If you’d prefer secluded living with Joshua trees, pine trees and even snow (gasp!), look to Mt. Charleston. As you climb highway 157, north of Las Vegas, you’ll notice the vegetation transitions from desert to Joshua tree fields, pinion pines and finally evergreens as the temperature drops.

Homes here range from giant estates to compounds where the barns are bigger than the homes, and mountain cabins on streets like Jack Frost St., Kris Kringle St., and Seven Dwarves Road right off Snow White St. Here you’ll have the skiing, hiking, and rock climbing that attract the desert dwellers as your backyard, and even have occasion to wear your winter clothes.

Vegas Neighborhoods Close to The Strip 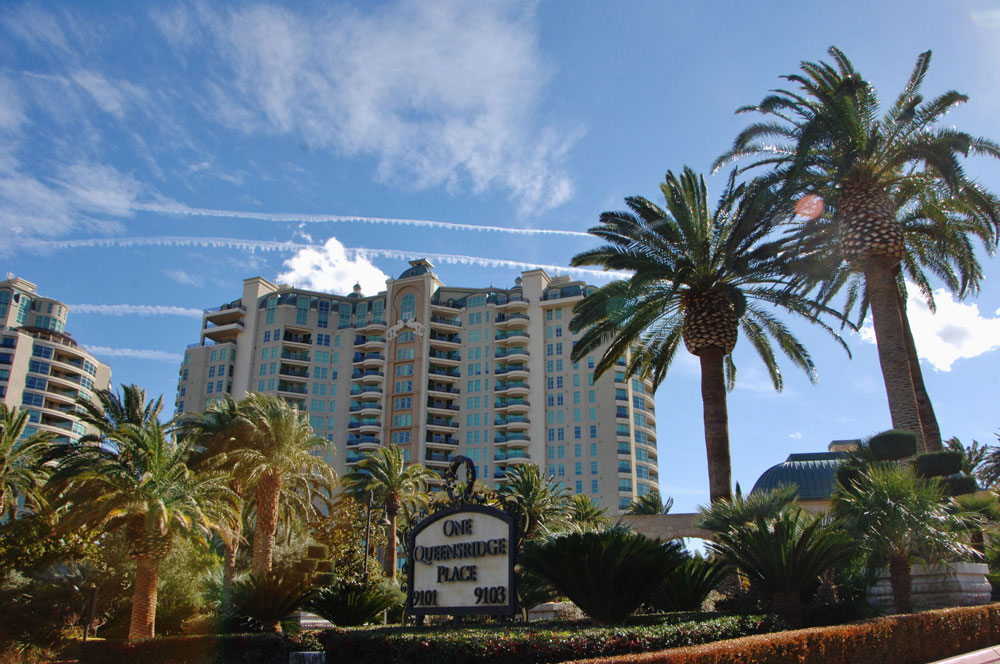 Warning: if you’re looking for a residence near The Strip, research the area very carefully.  There are some places that may seem like good deals from looking online but once you arrive, you’ll be looking for an extra lock for your door and mace. This is especially true directly east of The Strip.

One glowing exception to our warning about living near The Strip is the Scotch 80s. Directly west of the 15 and south of Charleston, the Scotch 80s was initially developed in the 1950s. Its proximity to downtown has made it a favorite for Las Vegas notables throughout the decades including Howard Hughes, Nicolas Cage, and Brandon Flowers from Las Vegas’s own The Killers.

Custom homes are on comparatively large lots with the charm and personality of homes from the era. Should you choose to live here, you’ll have to move quickly; homes aren’t often available in this exclusive community.

Most big cities have a plethora of high-rise options scattered throughout. In Las Vegas, the handful of high-rise buildings can be found Downtown. Not to be confused with The Strip, Downtown is directly north of The Strip, east of the 15 and south of 515.

Downtown has seen an economic boom recently and wonderful residential options have followed. This area encompasses the newly revived Arts District as well as the high rises on Freemont East. These high-rise buildings cater to people who don’t want the responsibility of single-family homes and those looking to call Las Vegas their home away from home.

Las Vegas is known for excess. These buildings carry the torch with so many over the top amenities – we’re talking rooftop pools overlooking The Strip. Many start to feel like a resort.

Did we miss your favorite Las Vegas neighborhood? Let us know in the comments and why you love it! 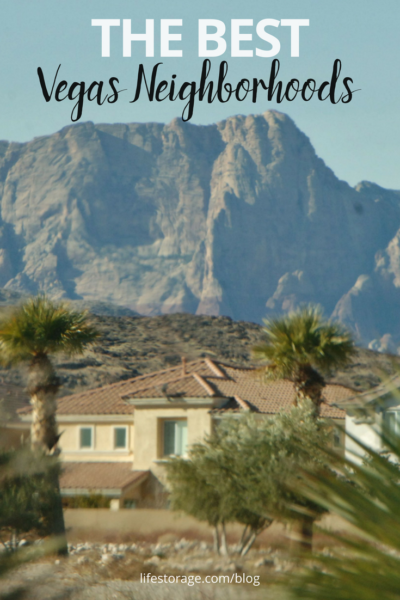 Zeke Quezada is a Southern California based travel writer who has been covering Las Vegas for the past 15 years as the Expert and Guide at About.com/TripSavvy.com. He is the author of "Restaurants in Las Vegas: The Best for Less." From his early visits as a child to his brief but eventful time as a resident of the Las Vegas valley, Zeke has experienced the growth of the city from a dusty tourist destination to a sprawling quasi-metropolis. He claims the Vegas Golden Knights as his second favorite hockey team but Las Vegas as his first favorite food city.