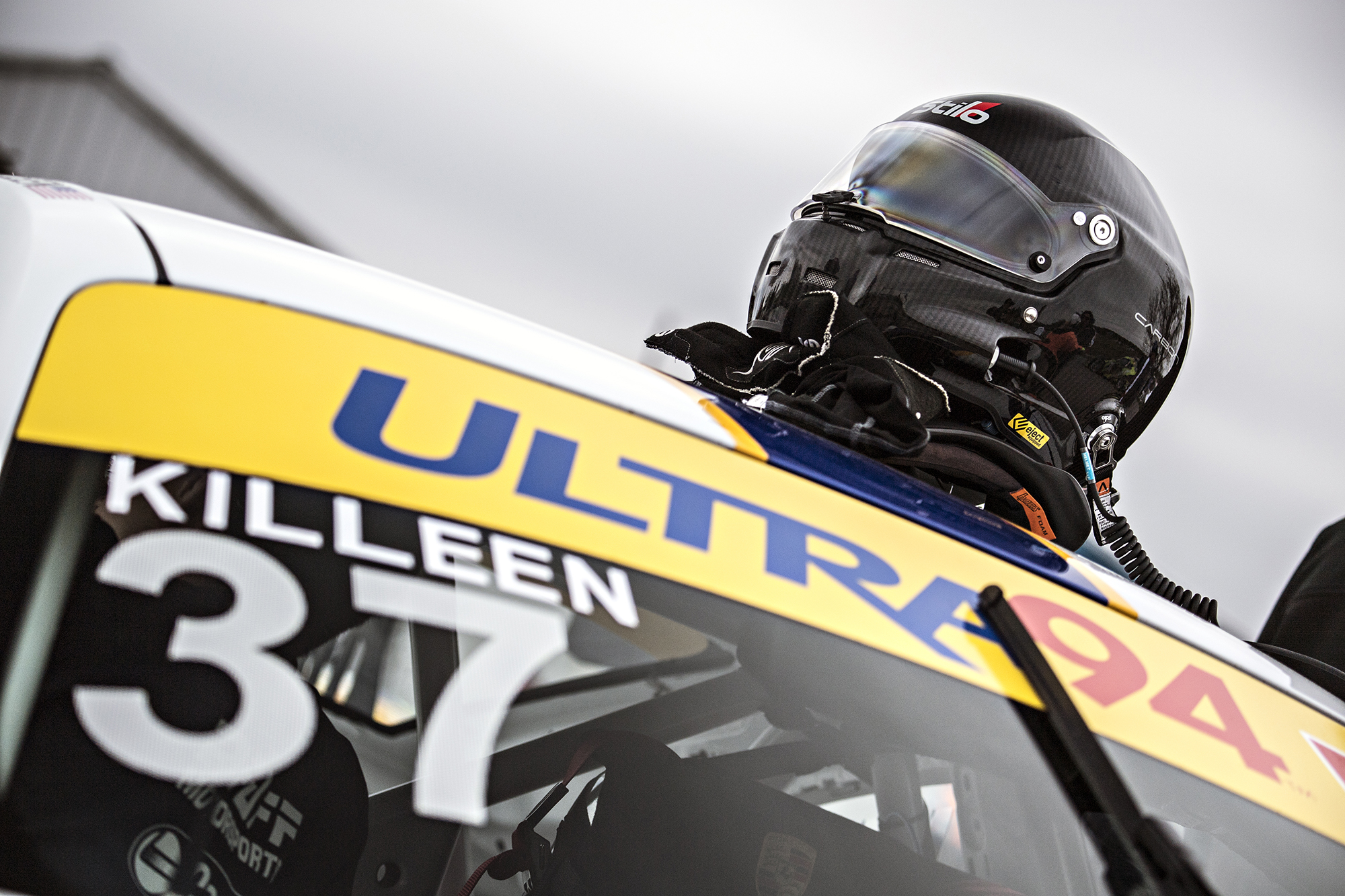 How did the Life Storage COO end up behind the wheel of a Porsche GT3 Cup car?

Competitive? Ed Killeen used to have an 8×10 photo of the CEO of a rival company hanging on the wall of his office. On occasion, a co-worker or visitor would ask why he had a glossy headshot of some dude on his wall.

Ed would tell them it was the guy he’s chasing. The photo was a daily reminder that someone was running ahead of him. Nothing personal, mind you. It reflected a burning passion, rooted in respect for a competitor, someone he was driven to pursue and hoped to one day pass by.

“I say it all the time: I need an enemy,” Killeen, the COO at Life Storage, said recently at the company’s Williamsville headquarters. “An enemy in business. I’ve picked those enemies. To me, our competitors are enemies. I need to beat that guy.”

That urge to compete has driven him throughout his life, whether he was building one of Buffalo’s footwear retailers, leading Life Storage’s meteoric national rise in the industry or taking up competitive auto racing at the relatively advanced age of 50.

Since Killeen joined the company (formerly Uncle Bob’s Self Storage) two decades ago, it has grown by leaps and bounds. Life Storage added its 500th store, then its 600th and 700th in the three years that he has been COO. It’s not uncommon for highly successful, competitive people to seek a new challenge as they approach middle age. Ed was no exception. He was doing great things in business, but he felt that competitive urge tugging at him. He needed something else to drive him, or as it turned out, something else to drive.

Getting His First Taste

Ed always loved the sheer beauty of cars and enjoyed watching auto racing. His late father was a car salesman in the 1960s and 70’s, at one point working alongside auto legend Lee Iacocca at Lincoln Mercury in Detroit where Ed was born.

“I was just a kid, but I grew up around it,” he said. “My dad used to take me to his car dealership in Rochester on Saturday mornings. Toward the end of his career he had a dealership. We moved around a lot while he was a company car guy and spent a lot of time (seven years) in Rochester.”

I was just a kid, but I grew up around it. My dad used to take me to his car dealership Saturday mornings.”

Killeen, whose parents grew up in Buffalo and moved back when he was 12, played basketball and football in high school. He was an avid golfer and cyclist as a younger man. He took one course in racing in the 1990s but abandoned it. But deep in his soul, auto racing was calling him. In 2013, he went to a race in Canada with friends. That fall, he took the sports car he’d had for a few years and begin “tracking” — driving for fun in a controlled setting.

“I’ve been hooked ever since,” he said. “I knew that as soon as I started tracking, within the next few years I’d want to start racing. Tracking was fun. I loved it. I loved trying to go fast, loved the experience, loved to learn about how to properly navigate a race track, manage corners for the most speed, proper braking and acceleration, the subtle nuances of getting speed out of a car.

A Need for Speed

Soon after, Killeen met Travis and Trevor Hill, Canadian brothers who run TWOth Autosport, a racing management concern in Ottawa. Their specialty is helping aspiring racers reach their potential. They were perfect for Ed, who wanted to learn racecraft and compete in a road racing series in Canada.

Oh boy, I was petrified… I’m in the Honda, which I had built by TWOth, and that was that — we went racing!”

“I met Ed five years ago,” Travis Hill said. “You could tell then he had a lot of emotion to him. We had to give him more direction on how to use that energy. I started looking into that and seeing how quickly he could start to pick up speed but also do it in the right way. He’s actually been incredible to work with.”

A year after hooking up with the Hills, Ed was racing in the ChumpCar World Series, an endurance series running at nearly every major race track in Canada and the US. Killeen raced in a modified 1996 Honda Civic. In the spring of 2014, he competed in a race at Watkins Glen.

“Oh boy, I was petrified,” Killeen recalled. “This was within weeks after my first racing school at Calabogie Motorsport Park where TWOth Autosport operates from. I’m in the Honda, which I had built by TWOth, and that was that — we went racing!”

Starting at the Bottom

So at around the same time he was elevated to COO at Life Storage, the apex of his work life, Ed was starting at the bottom of his new passion, auto racing. He embraced the fact that he was a mere novice, soaking in new knowledge every time he stepped on a track, getting better all the time.

That’s the thing with competitive people. It’s not the end, the reward that stirs their souls, but the journey itself. It helps to have an identifiable enemy. But in the end, you’re competing with yourself. It’s the same competitive instinct that made him a great salesman, someone who walked into a sneaker store at age 15 and starting waiting on customers because the need was there. He was too young to work, but the owner hired him anyway.

The same competitive impulse that led him toward the top of the self-storage industry inspired him to get on a race track with kids less than half his age to experience the rush of driving at speeds up to 180 mph.

Ed takes big bites, but he’s been stepping up very well and focusing that energy on what he needs to learn, picking up something new every time on the track and getting faster and faster.”

“Ed has a kind of swashbuckler mentality,” said Jim Kwitchoff, a regional vice president at Life Storage who has known Killeen for 30 years. “This is a company that started with one store down in Florida. They could have grown it to 20 or 30 and called it a great success. But they kept going and going, entering new markets, and now we’re 700 strong in 29 states. Ed has certainly played a big part in that growth.”

Killeen keeps going and going on the race track too, adding speed and race knowledge the same way that Life Storage was adding new stores. After a year in ChumpCar, he moved up to a Porsche GT4, running some regional races in Canada and even winning a couple. This year, he took a major jump up to the Porsche GT3 Cup Challenge Canada series, a Pro-Am road racing “spec” series that gets TV coverage and runs at top racing venues.

Hill, who among other things, handles driver development at TWOth Autosport, said it’s not so rare for a man Killeen’s age to race at this level.

“What is rare with Ed is how quickly he’s become competitive,” Hill said. “Each year has been a huge jump. Ed takes big bites, but he’s been stepping up very well and focusing that energy on what he needs to learn, picking up something new every time on the track and getting faster and faster.”

Killeen admits he has taken on a lot in a hurry. He said he’s struggling in his rookie season in GT3, finishing well back in the pack in races. But his expectations were realistic. He expected it to be tough. He’s racing on the same track with young guys, some who move on to big things in the sport. They say a fresh challenge is healthy for the brain. It keeps a man young.

“That’s been a big part of it for me,” Killeen said. “I don’t know what it’s doing for me, but that is absolutely what hooked me. I love going to the track and learning how to get faster. What I’m happy about is that, while I’m not finishing where I would love to finish every race, every time I get on the track I bite off seconds to half-seconds to a quarter to a tenth per lap. To be competitive, a quarter second per lap is an eternity.”

He realizes he started late, but he’s learning at an accelerated pace, soaking up information like a kid. That’s where the ultimate thrill lies — the knowledge that he’s getting better. Regardless of the endeavor, he’s never become content and satisfied in that lifelong race with his own ambition.

It really is the desire to compete and try to get better and learn the craft. And I just love the competition.”

Ed said he’s no “cowboy,” a racer who takes foolish chances and puts other cars in danger. He’s one of the “gentleman” drivers, a respectful amateur. He owns his car, and it’s an expensive pastime for a self-financed racer. In fact, he’s seeking sponsorship to help him remain on the circuit.

He can’t afford a big crash. In a recent race at Watkins Glen International, he saw two racers airlifted out after a serious crash on the first lap, one that saw the race canceled after totally destroying five cars and significantly damaging four others. He’s not there to be a superstar but to have a place in the sport, which means knowing your place.

“It really is the desire to compete and try to get better and learn the craft. And I just love the competition. I loooove when I see somebody coming up behind me, and even more so when I realize a car is within reach. OK, I’m going to get that guy. I’ve got to execute this corner, this corner, this corner. My crew chief Travis will say, ‘You gained two-10ths of a second on him, keep going, keep pushing, OK keep going, you should see him soon.’

At that point, he could have been talking about a rival company, or another driver on the track. Maybe both.