What’s With All This Stuff? The American Struggle with Clutter

Americans have a lot of stuff, and they don’t know how to deal with the clutter. Our study shows why this is and possible solutions for America’s clutter problem:

Americans value their stuff but don’t know where to put it.

Household clutter is nothing new – in fact, it’s as old as the human race itself. From axes and arrowheads in prehistoric caves to dishes and candlesticks among the ruins of Pompeii, our predecessors have left a record of their lives in the possessions they kept piled in their homes.

Did the Cro-Magnons or Pompeians feel stressed when their homes filled up with clutter? There’s no way to be sure. We do know, however, that clutter has become a significant source of frustration and anxiety today. While our piles of boxes and storage bins might be a treasure trove to the archaeologists of the future, consumer surveys and industry trends indicate that Americans are feeling increasingly stressed out by the clutter in their lives and are looking for new ways to deal with it.

A recent survey conducted by Life Storage on trends in home and self-storage indicates that more than 40 percent of Americans feel they have too much stuff in their homes. Furniture, clothing, and collectibles top the list of items that are cluttering up our homes and driving us to seek better storage and organization solutions. Collectibles, files, and work equipment are also prominently mentioned by consumers as contributing to the clutter in their homes.

To understand our clutter problem, we need to understand why we have so much stuff in the first place. Why are our homes filling up with possessions, and why is it so difficult to keep them under control?

A desire for security can lead us to hold on to unneeded possessions when our circumstances change. “Homeowners never want to be in need of something,” says architect and home staging expert Ronique Gibson. “We see this when people have to downsize homes. Homeowners don’t realize that they won’t need six televisions in a two-bedroom apartment, and they don’t want to part with any of them.”

Our approach toward marriage may also be contributing to our clutter frustration. U.S. Census Bureau data indicates that since 1970, the median age for a woman’s first marriage has increased from 20 to 26, and the median age for men has increased from 23 to 28. With Americans getting married later in life, today’s newlyweds have had several additional years to accumulate belongings. Married couples of prior generations were often starting out with only a carload of wedding presents, while today’s married couples are increasingly faced with the challenge of fitting two entire households’ worth of furniture, kitchenware, and other belongings into their new home.

Another primary cause of our clutter problem is our reluctance to get rid of things we don’t need. In a survey of self-storage customers in the United States, consumers reported that most of the items they have in storage were items that they use rarely or not at all. This raises an interesting question: if we know that we are never going to use certain things, why do we feel that it’s important to hold on to them? 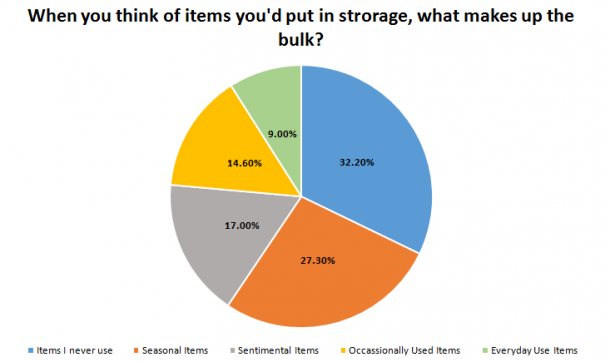 Americans rarely use items they put into storage

“There are several reasons why people hold onto things they no longer need,” says Andi Willis, a professional organizer and the owner of Good Life Organizing. “The first and most difficult to deal with are sentimental reasons. I’ve seen families hampered with generations of items that are not bringing them any happiness, because the volume and lack of proper storage has turned heirlooms simply into more clutter.”

Gibson agrees. “Sentimental items are the hardest to part with,” she says. “We all have items that are sentimental, whether they are from a childhood memory, a family member who has passed, historical items, or just plain nostalgic items that we don’t want to part with. Many homeowners take this notion to the extreme, wanting to keep the entire wardrobe of a deceased relative, for example, or wanting to keep enormous collections of antiques that can’t fit in their homes.”

Our propensity to hold on to clutter might be a simple inconvenience if it weren’t for the fact that all those extra belongings are contributing to higher stress levels.

Many Americans report feeling stressed about the amount of stuff they have and say that they don’t like to use their homes for storage. In the home storage survey, the majority of Americans said that they devote less than 10 percent of their homes to storage, while the majority in Canada and the UK reported using 20 percent or more.

Willis believes this may be due to a shift in American home designs. “Our living spaces have grown so much that the space for longer term storage has shrunken exponentially,” she says. “Great attention is put into everyday spaces like walk-in closets and kitchen pantries, but not so much in storage spaces like attics and garages.”

Cluttered homes create daily frustrations and can lead to unnecessary expenses. Despite the stress, Americans have shown that they would rather deal with considerable inconvenience than get rid of their unnecessary stuff. Approximately 75 percent of surveyed self-storage customers said they would store their stuff elsewhere, rather than sell it or throw it out, if self-storage were not an option. 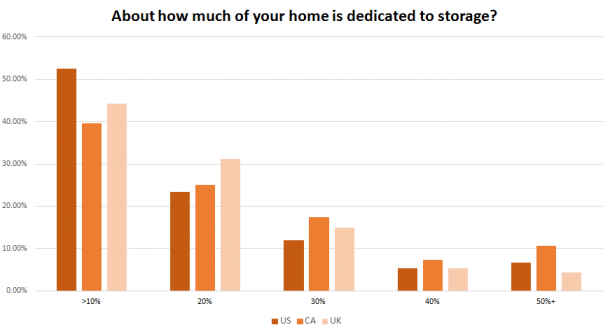 Americans have a lot of stuff, but the majority only dedicate 10% of their home to storage

An amazing variety of industries have sprouted up to provide ways for us to deal with our excess possessions. We can seek help from professional organizers, self-storage facilities, and storage product retailers. Or we can get advice from home organization blogs and online forums. We can even watch reality television shows devoted to cluttered houses and home organization strategies.

Choosing a solution can be as challenging as walking through a basement piled head-high with boxes. So where should you start when you’re ready to solve your clutter conundrum?

As difficult as it may be, learning to part with sentimental items is an important step.

Willis advises holding on to the sentiment, without necessarily holding on to the object. “Once you are given a gift, it becomes your property. You can do what you want with it,” she says. “I encourage clients to take a picture of the item and write down the story behind the item. Often this is enough, and they feel that they can let the item go.”

It’s also important not to accumulate clutter for the sake of vanity or status. “There’s a growing trend where people are collecting items like furniture and clothes simply because they can afford to buy them, rather than because they need them,” says Gibson. “The more they acquire, the more their friends and neighbors do, and the vicious cycle continues.”

Clutter has a way of creeping up on us over time. There’s a slow but steady stream of new items being brought into almost every home, thanks to shopping trips, birthdays, and holiday gift exchanges, but there are very few occasions on which we actually take things out of our homes for good (garbage and recycling day doesn’t count!).

One way to stem the rising tide of clutter is to build an occasional “downsizing day” into your schedule. A few times a year, set aside some time to get rid of a few unneeded belongings. An hour or two of effort every few months can save you days (or even weeks) of work further down the road.

Self-storage has become an increasingly popular solution to the clutter crisis. 16 percent of Americans say they currently use or are planning to use a self-storage space.

In many cases, particularly when the need for extra space is temporary, self-storage is an ideal solution. Nearly 50 percent of surveyed self-storage customers report that they are using their spaces as temporary solutions. People who are clearing out a house for showings, for example, or those who are between homes, may need to get some of their possessions out of the way for a short period of time, but may have ample space for them in the future.

The self-storage industry has grown significantly in recent years, with total revenues increasing by more than a billion dollars between 2010 and 2013. An industry study by Pell Research forecasts that the self-storage market will continue to expand in coming years, with the market projected to grow by 33 percent to $10.6 billion by 2018. Many consumers are taking advantage of special services like climate-controlled wine storage and are using mobile devices to find and manage their storage spaces.

If professional assistance isn’t in your budget, you can find a wealth of tips and suggestions from experts online. Following a few good home organization blogs will keep the subject fresh in your mind. It may be in the inspiration you need to keep clutter out of your life.

Whether you use a self-storage facility, a professional organizer, or both, remember: don’t bite off more than you can chew. “If people have a stuff problem, I suggest starting small,” says Willis. “Clear the top of the kitchen table or a small drawer in a dresser. By working in a small area for a short period of time, you can finish your first project and gain a feeling of accomplishment to propel you forward.” 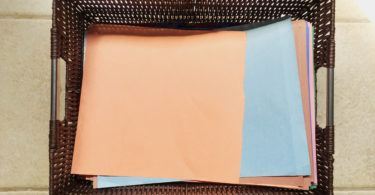 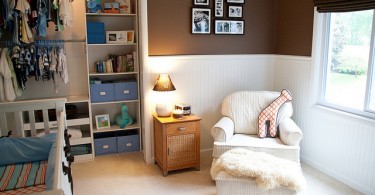 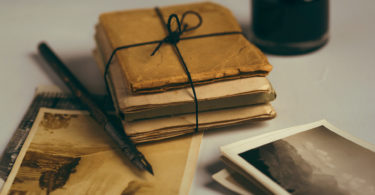 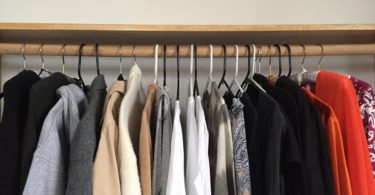